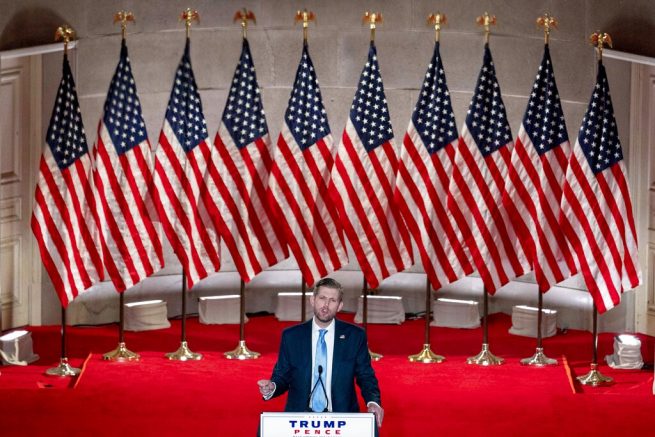 Eric Trump, the son of President Donald Trump, tapes his speech for the second day of the Republican National Convention from the Andrew W. Mellon Auditorium in Washington, Tuesday, Aug. 25, 2020. (AP Photo/Andrew Harnik)

Eric Trump said his father will continue to fight for “every proud American who bleeds red, white and blue.” He advocated for his father’s reelection in his speech at the 2020 Republican National Convention Tuesday. Eric said a vote for the president is a vote for the American spirit, dream and flag.

The president’s son also took aim at Joe Biden by calling him a career politician who does not know anything about the American worker or businesses. He claimed Biden has pledged to give all illegal immigrants amnesty and health care, pledged to stop border wall construction and pledged to defund police.

Eric also delivered a personal message to his father:

The president’s son said the American spirit will “defeat the empty oppressive and radical views of the extreme left” on Election Day.

RELATED: Night 2 of RNC highlights America’s role in the world