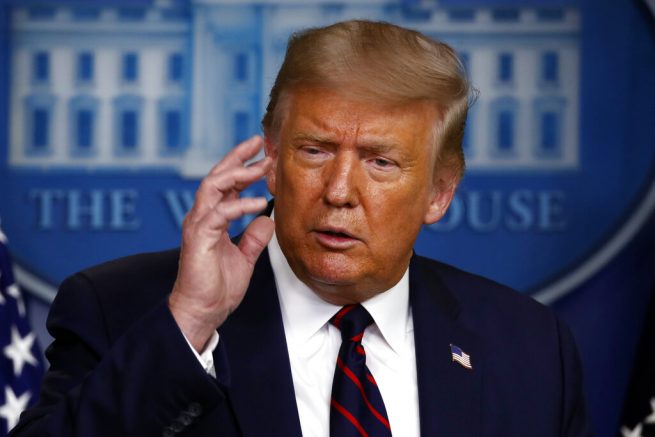 President Donald Trump speaks during a briefing with reporters in the James Brady Press Briefing Room of the White House, Tuesday, Aug. 4, 2020, in Washington.(AP Photo/Alex Brandon)

President Trump said he wants to extend emergency unemployment benefits in the next stimulus package. During an interview Tuesday, he noted that the people who have lost their jobs amid the pandemic shouldn’t be blamed for requiring assistance.

The president also said the American economy was “setting records” before the pandemic, adding that it was China’s fault the world’s economy came to a halt.

President Trump promised he would take care of the American people as Congress continues debating the specifics of the phase four relief bill. Additionally, he said he may sign executive orders to provide payroll tax cuts and halt evictions.

During a press conference Tuesday, the president stated that if Congress fails to agree on a new bill then he may need to take matters into his own hands. He also took aim at Democrat lawmakers for refusing to compromise on the legislation.

“So, I may have to do something on evictions too because the Democrats amazingly don’t want to do it,” stated the president. “We offered them short-term deals and we offered them lots of alternatives, but so far the only thing they really want to do is bail out states that have been poorly managed by Democrats.”

We need to urgently help working families and those who’ve lost their jobs. But the Speaker and the Democratic Leader are blocking the entire rescue package over a special, unrelated tax cut for rich people in high-tax blue states.

His remarks came after the eviction moratorium provided by the CARES Act earlier this year expired in late July. Meanwhile, the president also expressed optimism over the progress for a coronavirus vaccine by saying he hopes to have it out “very quickly.”

Commentary The U.S. trade deficit hit an all-time high in March, reaching $74.4 billion, as Americans spent their stimulus checks on foreign-made goods but were limited in their ability to spend their money on nearby […]

Univ. of Mich. locks out students for not taking required COVID-19 tests