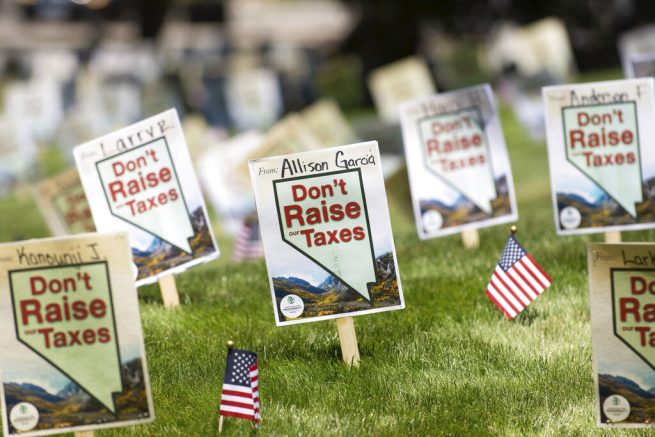 A new report shows that Americans are spending more money on taxes than food, clothing and health care combined. That’s according to a 2018 consumer expenditure survey conducted by the Bureau of Labor Statistics.

That survey found the average American unit, which consists of both shared and single households, spent an average of $9,000 on federal income taxes last year. Americans also spent an average of $5,000 on social security, more than $2,000 on state and local taxes, and another $2,000 for property taxes.

When comparing the total cost of taxes with the average cost of food, clothing and health care, the survey found that taxes cost about $3,000 more.

Earlier this year, President Trump unveiled a tax plan aimed at alleviating some of these costs.

“We promised that these tax cuts would be rocket fuel for the American economy and we were absolutely right,” stated the president. “More than 6 million American jobs received pay raises, people are receiving pay raises all across the country, and, you know, that really is a great thing.”

According to the White House, the president’s tax cuts help medium to low-income families by providing pay raises to more than 6 million workers and creating an additional 3 million jobs.

Meanwhile, families can also get double the tax credit per qualified child. The law also helps low-income neighborhoods by creating something called opportunity zones, which encourages companies to offer long-term investments in an area in exchange for tax deductions from the government.

“We’re having tremendous success in the inner cities because of the opportunity zones,” said President Trump. “Criminal justice reform — I was the one that got it.”

Officials anticipate these zones will generate about $100 billion in private capital investment.

The Florida Supreme Court on April 22 rejected a ballot initiative (pdf) aimed at allowing people to vote on the legalization of recreational marijuana, saying it would be “misleading” to voters. In a 5-2 ruling, the Supreme Court said the initiative’s […]

A dual resident of New York and Florida has been changed with fraudulently obtaining and laundering nearly $4 million in funds from the COVID-19 relief Paycheck Protection Program (PPP), according to prosecutors. Gregory J. Blotnick, […]