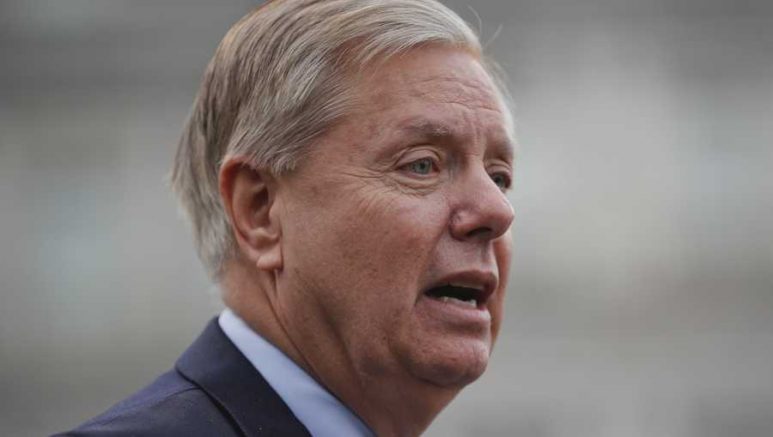 File – Sen. Lindsey Graham, (R-S.C.) speaks to members of the media outside the West Wing of the White House in Washington, D.C. (AP Photo/Pablo Martinez Monsivais)

Two newly declassified documents related to ‘Operation Crossfire Hurricane’ were released Friday by Sen. Lindsey Graham (R-S.C.). The operation was an investigation into the Trump campaign and what the FBI alleged was collusion with Russia leading up to the 2016 election.

Graham, who serves as the chairman of the Senate Judiciary Committee, has been questioning high ranking intelligence officials involved with Crossfire Hurricane. The senator has been seeking a better understanding of how and why the FBI attained warrants to investigate members of the Trump campaign.

Back in 2019, Inspector General Michael Horowitz confirmed that in the ‘Crossfire Hurricane’ team’s receipts of Christopher Steele’s election reporting, the dossier played a central role in the FBI’s decision to seek the FISA order. This helped the FBI attain warrants to spy on former Trump aide Carter Page.

Christopher Steele, a former British intelligence officer, was hired by Washington-based research firm Fusion GPS in June of 2016 and was paid to dig up dirt on the Trump campaign.

The Horowitz investigation into the Steele’s claims determined that the dossier was simply made up of hearsay evidence from two low-level sources and that other information within it was already available from multiple public outlets.

Graham’s document release shows new evidence that not only was there no verifiable evidence of collusion on the part of Trump’s campaign, but also top FBI officials were skeptical of Steele’s evidence back in early 2017.

In one of the released documents, Peter Strzok, a former FBI agent who opened the bureau’s Russia probe in 2016, annotated a New York Times article titled “Trump campaign aides had repeated contacts with Russian intelligence” from February of 2017 where he said:

“This statement is misleading…we have not seen any evidence of individuals affiliated with the Trump team in contact with international organizations.”

The second document released was a three-day interview with a key source of Christopher Steele’s, where information was given which unsubstantiated claims made in the original Steele dossier.

These comments by Mr. Strzok remind us why we should be very cautious and skeptical of any reporting by the @nytimes regarding the Trump presidency. https://t.co/PFit85BQ6k

Graham pointed out that these released documents and statements in Strzok’s annotation question the entire premise of the FBI’s investigation.

Like Horowitz, Graham said there were discrepancies between Steele and his source. However, this time the newly released document provides concrete evidence for that claim.

After releasing the documents, Graham said, “it was a miscarriage of justice for the FBI and the Department of Justice to continue to seek a FISA warrant against Carter Page in April and June of 2017.”

FILE – In this Oct. 29, 2012, file photo, Norfolk resident Jack Devnew looks at the water covering a dock as he checks on his boat at a marina near as rain and wind from […]

Sen. Schumer on N.Y. Gov. Cuomo: ‘He should step down’