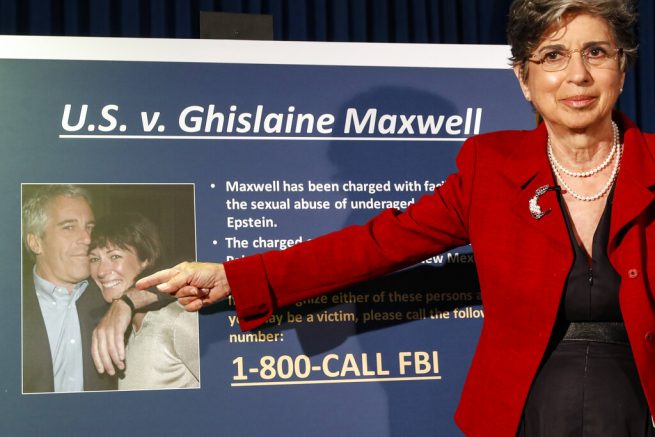 Audrey Strauss, Acting United States Attorney for the Southern District of New York, gestures as she speaks during a news conference to announce charges against Ghislaine Maxwell for her alleged role in the sexual exploitation and abuse of multiple minor girls by Jeffrey Epstein, Thursday, July 2, 2020, in New York. (AP Photo/John Minchillo)

The British socialite and former girlfriend of Jeffrey Epstein is expected to fully cooperate with federal authorities. On Friday, officials announced Ghislaine Maxwell will be naming names and cooperating with the FBI in its ongoing investigation.

This came after Maxwell was arrested earlier this week on sex trafficking charges.

According to officials, “the world’s most powerful” people, including Prince Andrew, are very worried about what she might reveal. The prince has refused to testify in the past over his association with Epstein and Maxwell.

“So, you know, I’m just so tired of the excuses,” said attorney Gloria Allred. “The victims want the truth, they want the transparency, they want him to tell law enforcement what he knows.”

Meanwhile, Epstein’s former boss Steven Hoffenberg has stated that Maxwell knows everything and will totally cooperate.

The NASA moon rocket stands ready less than 24 hours before it is scheduled to launch on Pad 39B for the Artemis 1 mission to orbit the moon at the Kennedy Space Center, Sunday, Aug. […]

Chinese leader Xi Jinping is solidifying his control over Chinese Communist Party (CCP) officials and the wider populace by establishing institutes around the country to propagate his eponymous dogma—known as “Xi Jinping Thought.” Since becoming […]