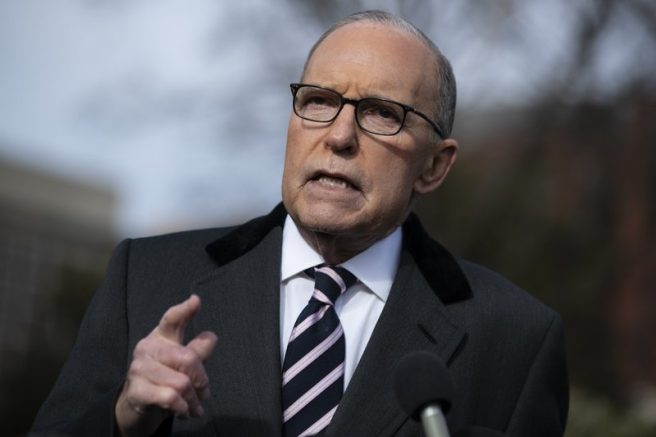 Kudlow made the remarks during an interview on Saturday. He stated unemployment benefits will continue, but suggested coronavirus relief aid will likely end in August.

Business owners have shared concerns over getting employees to come back to work, citing the money they’re getting from the government compared to their normal salaries.

“The $600 plus that’s above the state unemployment benefits they’ll continue to receive is, in effect, a disincentive,” stated Kudlow. “I mean, we’re paying people not to work, it’s better than their salaries would get.”

WH economic adviser Larry Kudlow: “We’re paying people not to work. It’s better than their salaries would get.” pic.twitter.com/LcAVguqSmm

In the meantime, President Trump is considering a reform measure to provide a bonus for Americans returning to work.

The economic adviser also dismissed ongoing Democrat attacks on President Trump’s push to reopen the American economy. He has said the president is focusing on restoring U.S. business activity after weeks-long shutdowns.

Kudlow emphasized the latest Democrat policy proposals are discouraging economic activity and making post-virus recovery harder. He also stressed the U.S. economy will not shut down again, despite rumors of a second wave of COVID-19.

MORE NEWS: A Month Into Reopening, No Clear Turn For U.S. Economy Or Pandemic

Anthony ‘Flip-Flop’ Fauci and the Origins of the Coronavirus Pandemic

Anthony Fauci is supposed to be the leading expert on infectious disease in America, and he is also the highest-paid public official, making $417,000 per year—more than the president—yet his flip flops on the pandemic […]