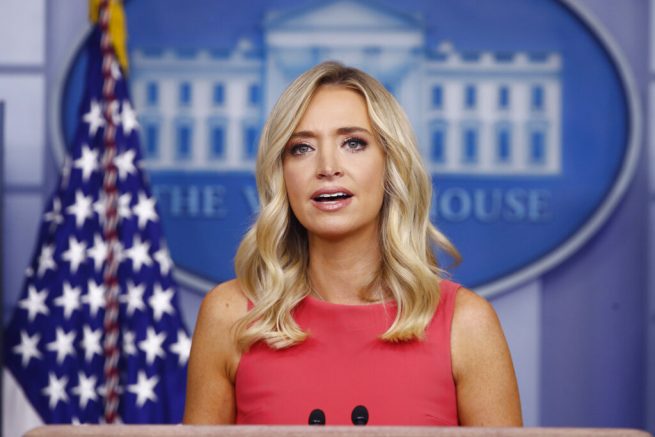 The White House has doubled down on President Trump’s tweet, which suggested Buffalo protester Martin Gugino could be a far-left provocateur. On Wednesday, Press Secretary Kayleigh McEnany reiterated anti-police sentiments are unacceptable and officers have the right to be heard.

On Tuesday, the president referred to a report by One America News, which questioned Gugino’s affiliations with radical left groups.

Buffalo protester shoved by Police could be an ANTIFA provocateur. 75 year old Martin Gugino was pushed away after appearing to scan police communications in order to black out the equipment. @OANN I watched, he fell harder than was pushed. Was aiming scanner. Could be a set up?

McEnany explained that he raised legitimate questions in his tweet.

“He has a right to ask those questions, and where he stands is squarely with law enforcement. He was making no judgments, not condoning violence, not saying what happened in this case with these two officers was right or wrong. He is standing back and saying we need to ask questions before we destroy lives and convict people in the court of public opinion.” – Kayleigh McEnany, White House Press Secretary

She also pointed out 57 officers at the Buffalo Police Department have resigned to protest the mainstream media’s support for Gugino.

Doctors take down misinformation on coronavirus

FILE – In this July 27, 2020, file photo, Nurse Kathe Olmstead prepares a shot that is part of a possible COVID-19 vaccine, developed by the National Institutes of Health and Moderna Inc., in Binghamton, […]

Queensland Labor MP Resigns ‘With Heaviest of Hearts’ Due to Cancer

Queensland MP Duncan Pegg has announced that he is resigning from state politics to focus on his health and treatment for cancer. The member for Stretton gave his final speech in Parliament on Thursday, where […]

MOSCOW—Russian authorities on Monday ordered the offices of imprisoned opposition leader Alexei Navalny to suspend their activities pending a court ruling on whether they should be outlawed as an extremist group. The injunction from the […]