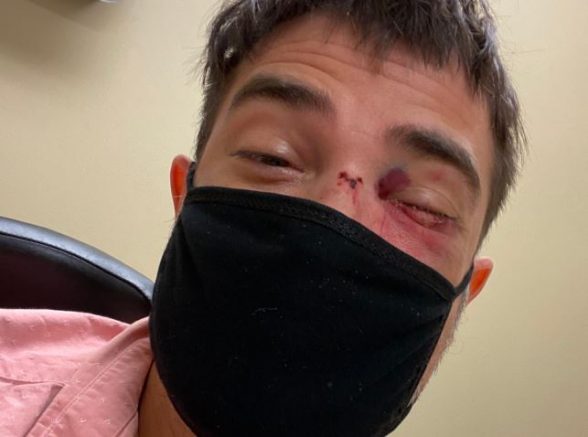 The ACLU of Minnesota has taken legal action against an alleged police attack on a journalist, who was covering the George Floyd protests. The suit was filed on behalf of freelance journalist Jared Goyette.

He was shot in the face by a rubber bullet while covering the demonstrations in Minneapolis last week.

I want to be reporting. Instead I am getting my eye looked at. Here is me and my patient daughter. She wants me to get an eye patch so I look like a pirate.

PSA: If you are in need of medical treatment and don’t have insurance, like me., @OpenCitiesHC is a good place to go. pic.twitter.com/V6YxzLe2lz

Several other reporters have been attacked, sometimes on live television, over the past week.

Goyette described the moments leading up to his alleged assault.

“When I got hit in the face by something that came from the police side, it hit me right here in the nose eye area. I was blindsided, I fell hard. People came to help me and eventually I managed to get out of there. I was not as badly hurt as the person that I was focused on earlier.” – Jared Goyette,  freelance journalist

When I was hit by a police projectile, an incident that is now part of an @ACLUMN class-action lawsuit against the MPD, I was trying to document what was happing to this man, and the efforts of people like @JaymalGreen to keep him alive. Never got a chance to finish. pic.twitter.com/Bbh71X4VC5

The string of incidents has brought into question the relationship between police and the press during these high-profile moments in history. In some cases, officers from departments across the country have been put on administrative leave, pending an investigation.

Missing New York College Student Believed to Have Taken Her Own Life: DA

Authorities in New York said they suspect that a missing Buffalo State University student took her own life, but they have not discovered her body. Saniyya Dennis, 19, was last seen leaving her residence hall […]

The Truth about Energy & Climate with Frank Lasee

House Minority Leader Kevin McCarthy (R-Calif.) said on Monday that he will introduce a resolution to censure Rep. Maxine Waters (D-Calif.) over comments he says “incited violence.” “This weekend in Minnesota, Maxine Waters broke the law […]