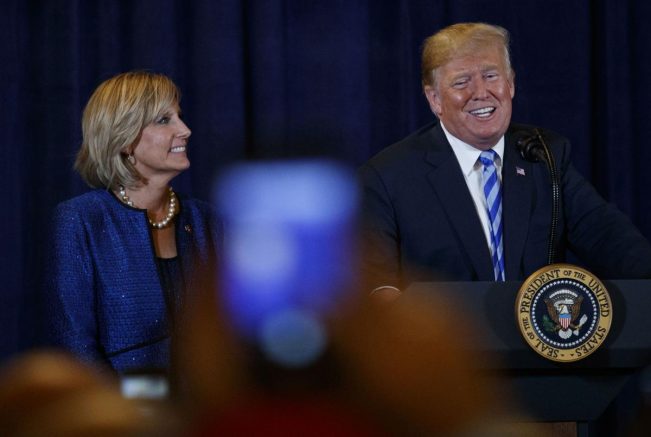 President Trump has named former Rep. Claudia Tenney as his choice to represent New York’s 22nd Congressional District. He endorsed Tenney via Twitter where he commended her on her past in Congress.

The president noted that she’s strong on crime, borders, tax cuts and the Second Amendment. He also added that she loves the military and veterans. President Trump finished the post by giving Tenney his complete and total endorsement.

.@ClaudiaTenney is a fantastic candidate running in New York, where she was a Great member of Congress. She is Strong on Crime, Borders, Cutting Taxes, your #2A, and she Loves our Military and Vets. Claudia has my Complete and Total Endorsement! https://t.co/pU36bNWR3t

The Republican congressional candidate quickly responded by saying she was honored to have the president’s support and that Upstate New York is excited to join him in the “Great American Comeback.”

Tenney got her political start in 2002 by representing New York state assemblyman David Townsend as his legal council and his chief of staff. She went on to win the 2016 election and served in Congress until she was unseated in 2018.

As a small business owner and military mother, Tenney is running on a conservative platform by opposing unnecessary taxation as well as supporting active and retired military.

“Republicans and Democrats from the Southern Tier to the Mohawk Valley, all across central New York people get up and fight for their families for their jobs,” she stated. “That’s who I’ll fight for in Congress.”

Tenney is a vocal advocate for the Second Amendment and was the first to introduce a bill to repeal Gov. Andrew Cuomo’s restrictive Safe Act, which is a model for restrictive gun laws throughout the country.

If Tenney wins the Republican primary, she will face off in a rematch with Democrat Anthony Brindisi who edged her out by less than two percent.

(Photo by SETH HERALD/AFP via Getty Images) OAN Newsroom UPDATED 1:30 PM PT – Thursday, November 19, 2020 Businesses in Michigan continue to worry about the economic impact of COVID-19 restrictions, although data from […]

Hundreds rally in support of those jailed in Jan. 6 protest