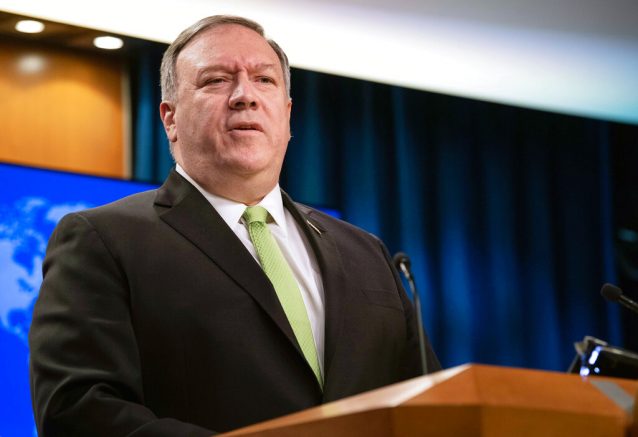 Secretary of State Mike Pompeo speaks during a press briefing at the State Department on Wednesday, May 20, 2020, in Washington. (Nicholas Kamm/Pool Photo via AP)

Secretary of State Mike Pompeo has warned that China may be a growing threat to democracy. In an interview Sunday, he said recent actions from the Chinese Communist Party has led him to believe its officials are “actively seeking U.S. harm.”

The State Department chief went on to claim China has become more aggressive over time, adding that the disruption is seen worldwide. Pompeo referred to the president’s remarks from the Rose Garden over the weekend, reaffirming he’s ready to respond to China’s aggression.

“The United States wants an open and constructive relationship with China, but achieving that relationship requires us to vigorously defend our national interests,” stated the president. “The Chinese government has continually violated its promises to us and so many other nations; these plain facts cannot be overlooked or swept aside…the world is now suffering as a result of the malfeasance of the Chinese government.”

The Chinese Communist Party is crushing what made Hong Kong different from the rest of China. As a result, the President no longer believes it’s justified to treat Hong Kong the same as before. The U.S. will defend itself from the tyranny of the CCP. pic.twitter.com/OJNoDoPvRJ

As of last week, Pompeo certified to Congress that the administration no longer views Hong Kong as an autonomous region of China.

RELATED: China bankrolling Biden Center at UPenn, according to report

White House press secretary Karine Jean-Pierre takes a question from a reporter during her first press briefing as press secretary at the White House in Washington, Monday, May 16, 2022. (AP Photo/Andrew Harnik) OAN NEWSROOMUPDATED […]

In this handout image provided by the Ministry of Defence, the British armed forces work with the U.S. military to evacuate eligible civilians and their families out of the country on August 21, 2021 in […]

Nathan Larson was arrested in Denver by investigators who said they stopped him from coaxing a 12-year-old girl to run away from her Fresno, Calif., home and flying with her across the country with intention […]