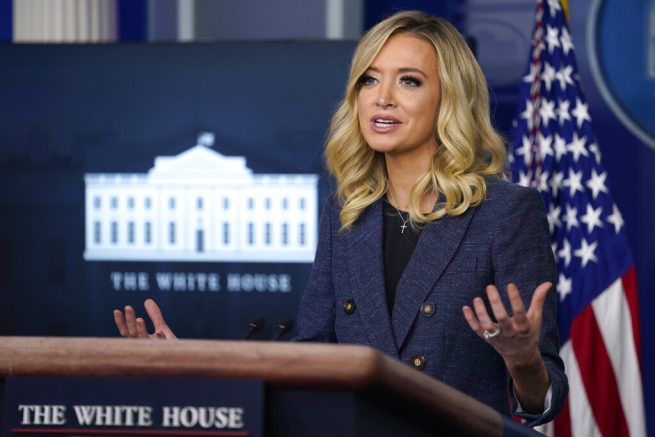 The Trump administration is rejecting the $3 trillion ideological “wishlist” in the Democrat-proposed coronavirus relief package.

On Thursday, White House Press Secretary Kayleigh McEnany said the Treasury Department has already injected more than $2 trillion to support the U.S. economy. She then stressed that President Trump is now working to lift Democrat-imposed lockdowns and restore economic activity across the U.S.

The Democrat-proposed bill demands billions of dollars to help the marijuana business, refinance state and local budgets as well as pay bonuses to medical personnel.

.@SpeakerPelosi‘s bill – an unserious proposal written to appease her base – is overflowing with spending unrelated to the coronavirus➡️

Republican Party officials have said the bill is “dead on arrival” in the Senate.

Chloe Zhao, winner of the awards for best picture and director for “Nomadland,” poses in the press room at the Oscars on Sunday, April 25, 2021, at Union Station in Los Angeles. (AP Photo/Chris Pizzello, […]

Australian Prime Minister Scott Morrison has extended his deepest sympathies to Indonesia after the Indonesian authorities confirmed the loss of submarine KRI Nanggala and its 53 person crew. In a post on Twitter on April […]