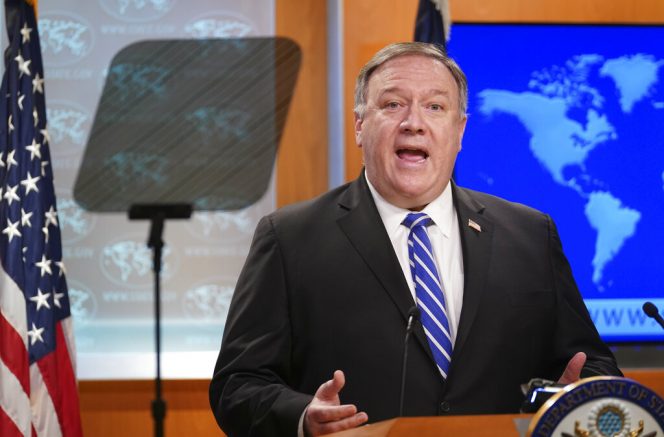 Secretary of State Mike Pompeo speaks a news conference at the State Department in Washington on Wednesday, May 6, 2020. (Kevin Lamarque/Pool Photo via AP)

Secretary of State Mike Pompeo said there needs to be high quality standards for Chinese labs run by the Communist Party.

During a CNBC interview Thursday, he said the only things the U.S. knows “for sure” is that the coronavirus originated in Wuhan, China and that the Chinese Communist Party covered it up.

The State Department chief said the U.S. has been consistently asking for transparency from China in order to prevent another outbreak like this from happening again. He said there’s a desperate need to identify and control the source of the problem. Pompeo also noted that SARS broke out in China when there were leaks from labs.

“We gotta make sure that we get our arms around this, not only for today, but to protect the world going forward,” stressed the secretary. “This is serious business…I think the world can see the enormous economic pain that has been inflicted on the globe and now a quarter million lives…destroyed as a result of what happened in Wuhan.”

China could have prevented the deaths of thousands of people worldwide and spared the world a descent into global economic malaise. They had a choice. China is still refusing to share the information needed to keep people safe. This is not about politics, it’s about saving lives. pic.twitter.com/AT46I81mWv

Pompeo went on to discuss how U.S.-China trade relations will move forward following the U.S. criticism of China’s coronavirus response. He said he’s “most concerned that China does what’s right for American workers and employers,” adding that there’s potential for more trade talks.

Senate Minority Leader Mitch McConnell, R-Ky., speaks at a Senate Rules Committee markup to argue against the “For the People Act,” which would expand access to voting and other voting reforms, at the Capitol in […]

Former Secretary of State John Kerry is accused of leaking information about a U.S. ally to Iran. Kerry is now facing increasing pressure to step down. As to the border, four counties in Texas make […]