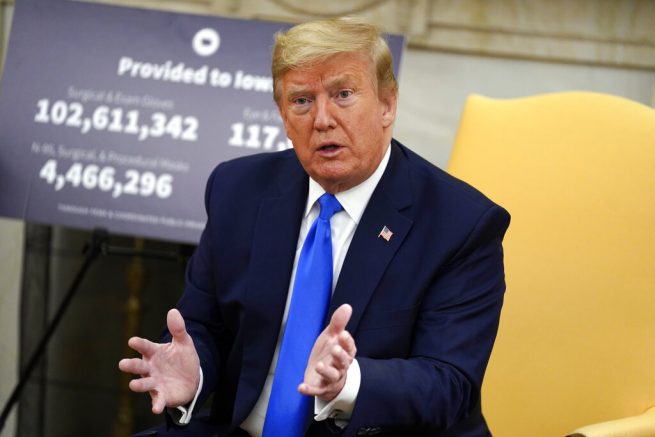 President Donald Trump speaks during a meeting with Gov. Kim Reynolds, R-Iowa, in the Oval Office of the White House, Wednesday, May 6, 2020, in Washington. (AP Photo/Evan Vucci)

President Trump has addressed concerns from health experts, who are worried about the U.S. reopening the economy too early. On Wednesday, the president was asked if the nation will just have to accept a rising number of COVID-19 cases and deaths as states begin reopening.

He explained that people of a certain age and those with underlying health problems should take extra precautions, but noted healthy and capable citizens should be allowed to go back to work as long as they practice social distancing.

JOHN ROBERTS: Will the nation just have to accept the idea that by reopening there will be more death?

TRUMP: “We have to be warriors. We can’t keep our country closed down for years … hopefully that won’t be the case, John, but it could very well be the case.” pic.twitter.com/GgJRW3FX9b

The president emphasized people won’t continue to stand for it because the country has to get moving again.

“You know, this virus is going to disappear. It’s a question of when. Will it come back in a small way? Will it come back in a fairly large way? We know how to deal with it now much better…but we can’t have our whole country out. Can’t do it, the country won’t take it. It’s not sustainable.” – Donald Trump, 45th President of the United States

From an economic standpoint, the president said he believes 2021 will be a big year for recovery. He called the pandemic “the worst attack we’ve ever had on our country.”

President Trump: Coronavirus is the worst attack since Pearl Harbor or 9/11. It could have been stopped at its source, in China, but it wasn’t pic.twitter.com/F3kuPSXTko

Meanwhile, former CDC Chief Tom Frieden has estimated the U.S. will hit 100,000 coronavirus deaths by the end of the month. While testifying before Congress on Wednesday, he said the nation’s war against the virus will be “long and difficult.”

Friedan argued the country will be able to reopen as soon and safely as possible by basing its decisions on data. However, he warned that the coronavirus could be around for years.

“As bad as this has been, it’s just the beginning,” stated the former CDC chief. “Until we have an effective vaccine and unless something very unexpected happens, our viral enemy will be with us for many months, possibly many years.”

He noted Americans are becoming “impatient to restart activities” and acknowledged that lockdowns are hurting the economy, but added future outbreaks are inevitable.

The Chinese regime is heavily relying on Twitter and Facebook to broadcast its state propaganda to the global audience and its online effort has been amplified by fake Twitter accounts, according to recent reports. “We […]