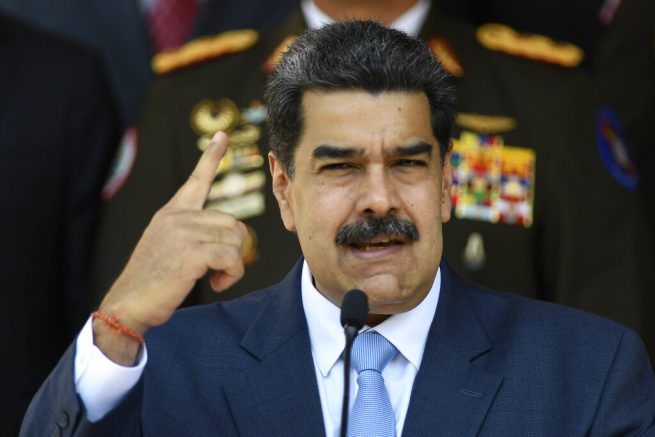 FILE – In this March 12, 2020 file photo, Venezuelan President Nicolas Maduro givesa press conference at the Miraflores presidential palace in Caracas, Venezuela. When hints of a cross border conspiracy staged from Colombia to raid military bases and ignite a popular rebellion that would end in Maduro’s arrest surfaced in March 2020, Venezuelan state media portrayed it as a Bay of Pigs redux ginned up by the CIA. (AP Photo/Matias Delacroix, File)

The Maduro regime claimed it has detained a Drug Enforcement Administration (DEA) agent in an alleged “mercenary attack” on Venezuela.

On Sunday, top allies of embattled leader Nicolas Maduro said the regime’s security forces killed eight mercenaries and captured two others in what they claimed was a foiled attempt to overthrow the government. Regime officials also said they seized weapons, trucks, a speedboat and other equipment.

Maduro officials claimed they were tipped off about the operation by their allies in Colombia.

“We had information that was sent to us from Colombia about this incursion,” stated Diosdado Cabello, president of the constituent assembly loyal to Maduro regime. “We did not have the details where, but today we could see why these boats, you know that they have a GPS, and with the GPS one can trace all the path from where they left, where did they go and those boats left from Colombia.”

Meanwhile, Secretary of State Mike Pompeo said the U.S. Navy has continued its anti-drugs and anti-terror operation off the Venezuelan coast.

Vote came after Gov. Whitmer was caught violating her own administration’s rules at a bar The Michigan House of Representatives voted this week to approve a bill that would bar the state’s Occupational Safety and […]