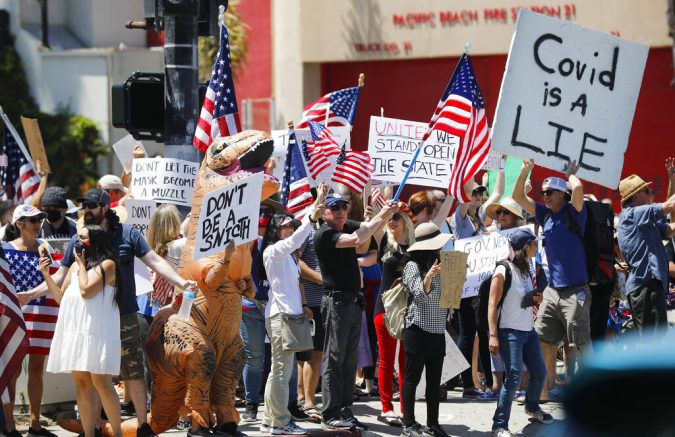 Protesters stand along Mission Blvd. during A Day of Liberty rally in Pacific Beach in San Diego, Sunday, April 26, 2020. The protesters were rallying against the government shutdown due to the coronavirus outbreak. (K.C. Alfred/The San Diego Union-Tribune via AP)

Residents of San Diego are demanding an end to virus-related shutdowns in California. On Sunday, hundreds of people took to the streets of Pacific Beach to call for a quicker reopening of the economy in San Diego and across the U.S.

According to the protesters, economic lockdowns are destroying the travel and tourism industry in their city. Many also said the lockdowns violate their constitutional rights as Americans.

“My question is this: why is the news media so suddenly interested and intensely focused on pathogenic respiratory illness when this is not only not new, but the numbers of the story that they’re covering pale in comparison to what influenza does to us annually in this world?” asked Kelly Neill, an attendee of the ‘Liberate San Diego’ protest.

Come on down, the weather is fine, the people are friendly, and exercising your rights is more important than ever. #PacificBeach #SanDiego #protest #BacktoWorkAmerica #lockdown #pacificbeachprotest #riseup #freedom #OPENAMERICANOW #endthelockdown #protests pic.twitter.com/UxDimdL7nl

Protesters also called on President Trump to reopen the U.S. economy sooner and prevent a rise in poverty, unemployment and economic despair.

San Diego is expected to reopen its economy on May 1.

District of Columbia Attorney General Karl Racine (L) and Texas Attorney General Ken Paxton speak during the launch of an antitrust investigation into large tech companies outside of the U.S. Supreme Court. (MANDEL […]

Former Secretary of State Mike Pompeo weighed in on President Joe Biden’s address to the joint session of Congress on Wednesday evening, characterizing the president’s vision for America as “radical” and “socialist.” Pompeo made his […]