Looking for a new job? You’re in luck.

There are 7.1 million job openings, a record high, according to the JOLTS report through August, as tracked by the Bureau of Labor Statistics.

That’s more than the 6.2 million unemployed Americans who are possibly on the hunt for a new job. Pay is also on the upswing for full-time salary and wage workers. Average weekly earnings rose to $887 in the third quarter, 3.3 percent higher than a year ago, per the BLS.


“We knew the job market was tight. But we didn’t know that we’d break through the 7 million number on job openings,” Mark Hamrick, senior economic analyst at Bankrate.com, tells FOX Business. “All of this suggests that the unemployment rate can continue to edge lower. Wages should make further progress to the upside, despite the frustration that this has been slow and late in arriving.”

The data, released Tuesday, is the latest check on what is a red-hot job market. The U.S. unemployment rate is sitting at 3.7 percent, the lowest since 1969. In September, job growth of 134,000 was driven largely by health care, manufacturing and construction. Within these key sectors, the White House is encouraged by the rise of working class jobs. 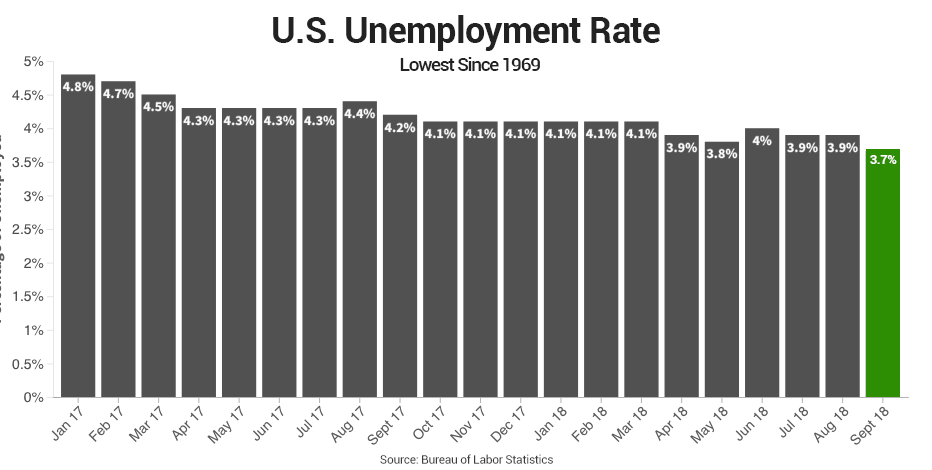 “Blue collar workers are booming right now, the fastest pace of hiring blue collar workers since the mid-1980s when I was first there as a Cub Scout for President Ronald Reagan,” said White House chief economic adviser Larry Kudlow during an interview on “Fox News Sunday” last week.

The latest read on the job market pleased investors. U.S. stocks jumped across the board on the news, shaking off a recent bout of volatility which clipped more than 831 points off the Dow Jones Industrial Average during last Wednesday’s session. The benchmark of the 30 Dow members has recouped all of last week’s losses.

BET founder: Trump’s economy is bringing black workers back into the labor force

The growing U.S. economy and improving business environment is bringing black workers back into the labor force, BET founder Robert Johnson tells CNBC. “When you look at that, you have to say something is going […]

As political analysts ponder the status of that proverbial blue wave, many have wondered whether the strong US economy will act as a mitigating factor, blunting expected GOP losses and enabling the in-power party to […]

Bad News For Dems: Household Income Hits All-Time High Under Trump … And He’s Getting Credit For It

Growth: A new report shows that the median household income has climbed 3% since President Trump took office. It’s another sign of a strong economy, and at least one poll shows the public credits Trump […]