That press release has almost completely been scrubbed from the Internet, but is preserved in at least one tweet and in an Internet archive sponsored by The American Presidency Project.

The Clinton campaign, which funded the debunked dossier in an effort to obtain a FISA warrant to surveil Trump Tower, actively promoted a “Bombshell Report About Trump Aide’s Chilling Ties To Kremlin.” The Trump aide with the purported Kremlin ties was Carter Page. The “bombshell report” was a Yahoo News article by Michael Isikoff headlined “U.S. intel officials probe ties between Trump adviser and Kremlin.”

Rep. Devin Nunes’ intelligence memo makes clear that Isikoff’s article, which was promoted by the Clinton campaign, used Christopher Steele as its source and was used to help obtain the FISA warrant. The FISA warrant application falsely states that Steele did not leak information to Yahoo News.

“We’ve never seen anything like this in American politics,” Hillary for America says in its statement, which called the information in Isikoff’s article “chilling.” 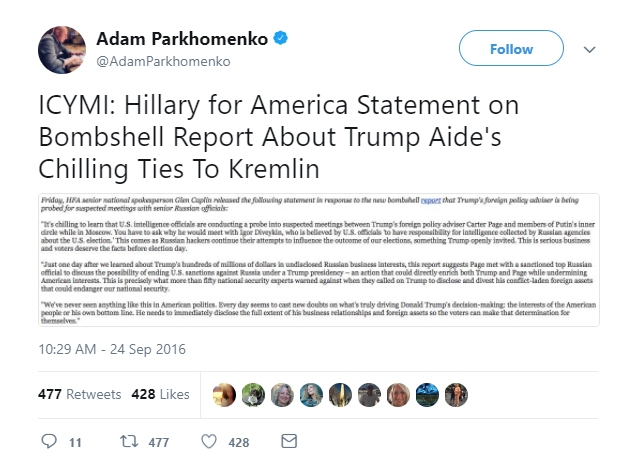