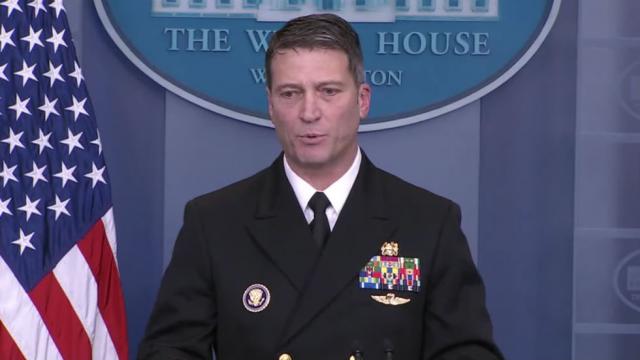 President Trump’s doctor announced Tuesday he is in “excellent” health and fit for office, saying the president himself requested a mental-health assessment to dismiss questions about his fitness.

“The president’s overall health is excellent,” Jackson said. “His cardiac performance during his physical exam was very good, he continues to enjoy the significant, long-term cardiac and overall health benefits that come from a lifetime of abstinence and alcohol.”

“All data indicates the president is healthy and will remain so for the duration of his presidency,” Jackson added.

Jackson said Trump could stand to lose 10 to 15 pounds and improve his diet. He also has slightly high cholesterol that’s being treated by the drug Crestor.

The president currently “doesn’t have a dedicated, defined exercise program” but Jackson said that could “easily change” and added that he’s been impressed by the president’s stamina in office.

“We talked about diet and exercise a lot, he’s more enthusiastic about the diet part than the exercise part, but we will do both,” Jackson said.

The 6’3″, 239 pound president is one pound away from being considered obese under a scale used by the Centers for Disease Control.

Jackson revealed in detail how Trump requested a mental-health evaluation in order to put questions about his fitness to rest.

The doctor said he had not planned to include one because it was not recommended by medical protocol and he had no personal questions about his mental fitness.

“I’ve seen him every day,” Jackson said. “I had absolutely no concerns about his cognitive ability or his neurological functions.”

But on the president’s urging, Jackson conducted the Montreal Cognitive Assessment test on him, with Trump scoring a 30 out of 30.

That test is not a psychological evaluation best tests for cognitive disorders like Alzheimer’s. The evaluation, and Trump’s ask for the test, comes after Democrats have raised concerns about the president’s mental fitness for office.

“I can reliably say and the folks in the mental health community would back me up on that, that if he had some type of mental cognitive issue that this test is sensitive enough to pick up on that,” Jackson said.

The president is taking few medications — a low dose of Aspirin and Crestor, as well as propecia to prevent baldness, a cream for rosacea and a multivitamin. Jackson said he will prescribe a higher level of Crestor, which fights high cholesterol, for Trump.