On April 27th, 1961, Then President John F. Kennedy gave a speech to newspapers and publishers at the Waldorf-Astoria Hotel, in New York City

While this speech has been quoted out of context for a variety of purposes, it’s an article that is especially salient today.  Kennedy jokingly calls it The President and the Press, but goes on to say some might more correctly call it … The President Versus the Press, which evoked a chuckle out of me as I thought about the current relationship our President has with the media.

The speech discusses how during times of war, the press rises to the occasion, and understands that as Americans, it is all of our responsibility to protect and serve our Nation. After all, America had fought two world wars, and during the second, ran an entire campaign on “Loose Lips Sink Ships.”

But in 1961, America was faced with a new threat. It was not the typical threat that we were used to. It was not a threat of bombs or missiles, or troops. It was not a threat of invasion by force. It was a covert effort by determined enemies, who unlike America’s open and free society, were a closed society of brutal dictatorship, with iron fisted control on the press, the military, and the economy. It was an enemy, that had every intention of global domination.

After the second world war, and the first use of atomic weapons by the United States against Japan, the face of war was forever changed. America’s military might was fearsome, and the newest weapon on the stage was a horrible weapon of destruction that no nation wished to face. America’s enemies, and she still had them, even if they were afraid to overtly attack her, still plotted her destruction.

That enemy had evolved a new strategy. Applying pressure on America’s allies, engaging new allies, and weaponized its state media to confuse and blur the truth and discredit and oppose America at every turn. That threat was an existential threat to our way of life, whose methods included infiltration and subversion. 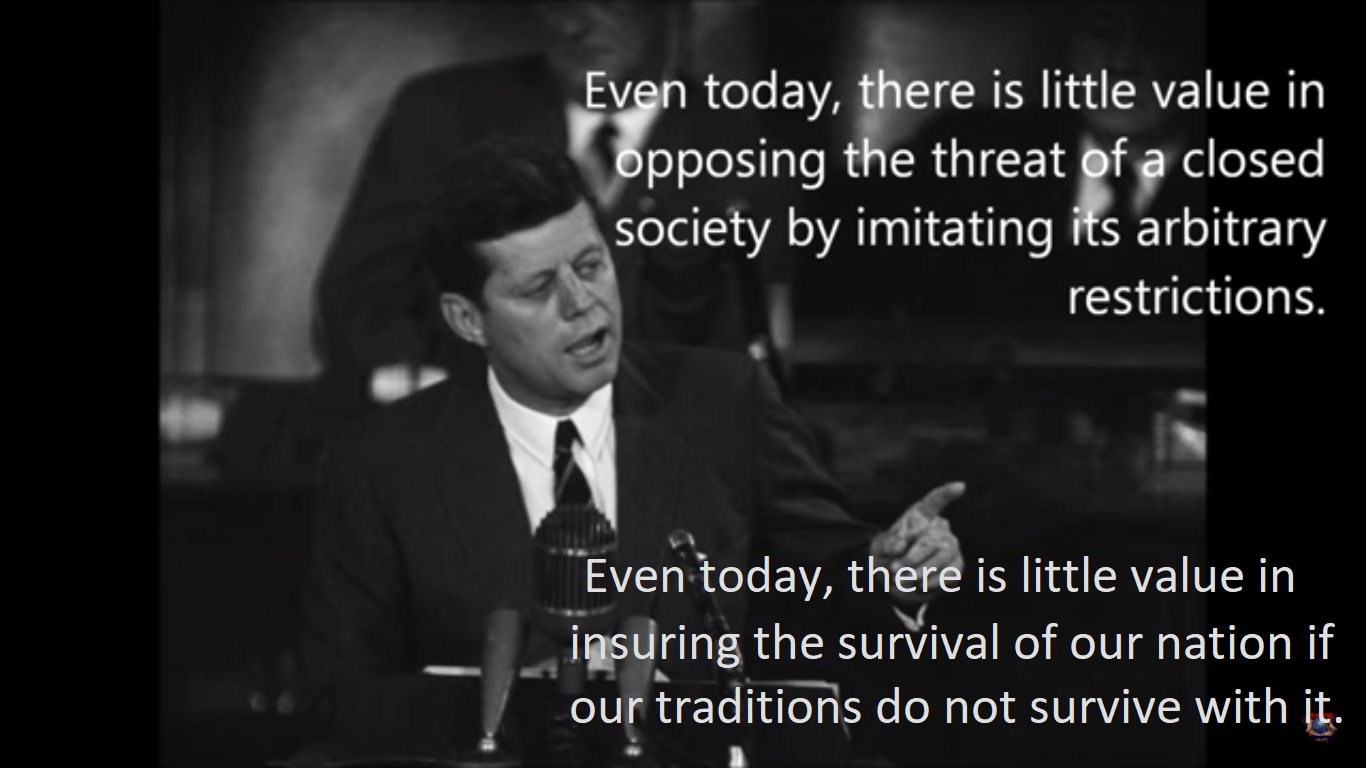 In the speech, Kennedy rightly says that there is no use in combatting this threat using the methods of the enemy. That he would not seek censorship of the media, and would not condone withholding valuable information from the American people, because he had “complete confidence in the response and dedication of our citizens whenever they are fully informed.” And that there was no use in winning a war, if our free and open society and our traditions did not survive with it.

Now as an active participant in the history since that time, certain alarm bells were rekindled by Kennedy’s words. For nearly a decade I have been sounding the alarm bells on communist influence on our education system, and with interviews and video’s of former KGB, it was quite apparent that Kennedy’s words were painfully true. America has been under continuous attack for the last 70 years.

The Former President went on to say that if the media was waiting for a Congressional Declaration of War as had happened in the past, no such declaration was forthcoming, but that the threat was just as great if not more so than in any shooting war. He was, of course, referring to the cold war.

But listening to the speech, it also became apparent that Kennedy was NOT speaking to the same media and press that we see today. He was speaking to men and women that he could count on to be responsible American’s first and foremost. That media is gone and dead. The media is no longer American, it is international, and those same forces that had long ago begun infiltrating our schools, are now in full control of the media.

Where Kennedy beseeched the press to inform people, they were not in the business of disinformation. We all believe that the cold war ended with the fall of the Soviet Union. It did not. The cold war ended because our enemy became so successful at hiding, that we could no longer figure out who our enemy actually was. But those same forces had now fully embedded themselves into the machine and were free to act with impunity.

It is said that the Devil’s greatest accomplishment was to convince the world that he did not exist.

The Devil’s greatest accomplishment was to convince the world that he did not exist.

But the devil was still there. Much as Hitler had once done, it recognized that the key to overthrowing America relied on influencing the youth so that as a new generation could enter the work force and political arena and corrupt America from within. Sadly, George Orwell’s 1984 was meant as a warning, but it had become a blue print.

As we have since learned from the 2016 election, the Democratic Party has been completely co-opted. The Party was caught conspiring to thwart the democratic process, rigging their own primary for President. No surprise here, the democrats have been the party of voter fraud for quite some time, registering dead voters, driving busses of voters from city to city, and opposing voter ID laws in the name of racism. But the democrats didn’t stop there. They realized that if you opened America’s elections to the world, the world could vote America out of existence.  Today we have the Democrat majority leader blatantly calling the President racist for opposing non citizen voting rights.

But what happened in 2008 ???  The world may never know. Did the Democrats rig their primary then too ? At this point it is difficult to tell, as hindsight shows that both candidates were part of the ongoing efforts to bring America down. At some time over the last 50 years, the Democratic Party had morphed into the Communist Party. Were Kennedy alive to see his Party today, he would lament that his Country was already lost. What used to be Kennedy’s Democratic Party would be viewed as conservative today, and what today’s democrats have become, is openly Marxist.

56 years after Kennedy’s warning, America’s Schools, Media, and now Government had been infiltrated to the highest levels. I don’t for one minute believe that it is a coincidence that Barack Hussein Obama and Eric Holder were graduates of Columbia University. As a den of communism, Columbia University was also where professors Richard Cloward and Frances Fox Piven formulated a strategy to remake America by overloading its entitlement programs, and crushing America’s economy whereby a prepared group could step in and remake the Country in the model of Communism.

It would seem that all of the pieces were working and in place. Under Obama, entitlements sky rocketed. American debt soared from 9 trillion to 20 trillion, and the Fed robbed America blind by expanding its balance sheet and in essence dumping billions of dollars into the economy.

What most people don’t realize is that what the Fed did was no different than what Greece did. Greece stuck their hands into all of their citizens bank accounts and took 20% of their savings to reduce Government debt. The Fed did it by diluting our currency so that the money you had in savings would BUY 20% less. No, America would never have stood for what Greece did openly.

The fruits of Obama were everywhere to be seen.


Riots became the new norm. A war on police ensued, seemingly un-stemmed by the CIC. America was being torn apart from within. History was rewritten, and generations of communist educated students filled the streets. And all through it, the machine stomped on the throats of anyone that objected, destroying them and labelling them Racists. The IRS was wielded like a cudgel against political opposition. Anyone that opposed the president was branded a racist. America had coined a new term. “White Privilege”, and the communist arm accelerated all of their activities while America seemed unable to form any kind of cohesive resistance.
[adrotate group=”7″]

Yes, all of the Traditions and History that made America what it was, were systematically being dismantled to the point where saying “God Bless” you when someone sneezed, or “Merry Christmas” became an offensive act that Americans should be ashamed of.  Burning the American flag was covered by free speech, but the Confederate Flag was racist and offensive. It has been clear for years now where this was headed. All of this to brainwash Americans into believing they were horrible, evil racists, and that the American Flag was the symbol of a hated empire.

Former President Obama even began his Presidency with an “Apology Tour”. Bowing to her enemies and abandoning her allies. We watched his cabinet enter into a bazaar collection of “Treaties” and agreements, which seemed to directly conflict with both the Constitution, and the very idea that America was its own country in charge of its own destiny. Constitutional battles broke out in courts across the Country, many of which were carefully crafted to give International Law, precedence over America’s own Constitution.

But what if it was not only a case of negligence on the part of the press …. What if it was instead, collusion on the part of the press, with America’s enemies?  Why can we no longer trust what the press is reporting ? Kennedy’s words are on point with this, and it seems that America has used that concept of a cold war, or an undeclared war to enter into many a conflict. A war on drugs, a war on poverty, a war on terrorism …

In the end, as I have told so many people … go to the source yourself… and with that … to the tapes.

On this day in 1916, the First Aero Squadron, organized in 1914 after the outbreak of World War I, flies a support mission for the 7,000 U.S. troops who, six days earlier, had invaded Mexico […]

WALSH: The Only Thing Preventing Us From Descending Into Civil War

We’re told that “division” and “partisanship” and “bigotry” are destroying America. “Hate” is the cancer in our cultural bloodstream, they say. We must fight against hate speech and hate crimes and hate in every other […]

General thoughts on First Aid and Survival in the back country Wilderness is described as any area in which a person may be an hour or more from any modern conveniences, or medical attention. Wilderness […]