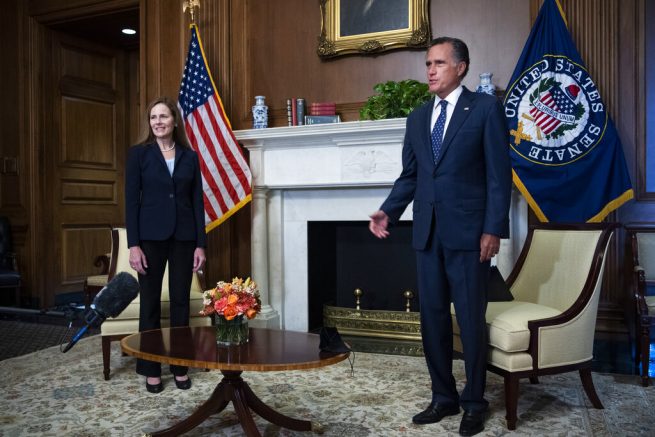 The Utah Republican signaled on Tuesday, he supports the President’s decision to put forward a new Supreme Court nominee. The two met as part of efforts for Romney and other GOP members to discuss Barrett’s qualifications. The members hope to reach a consensus to support Barrett as a nominee for the Supreme Court.

“I’m really looking forward to our chance to speak, I’m sure we’ll have a very interesting and informative opportunity to speak with each other,” Romney stated.

Enjoyed meeting with Judge Amy Coney Barrett, the President’s nominee to serve as Associate Justice on the Supreme Court. We had an informative, wide-ranging discussion about her impressive background and judicial philosophy. Look forward to her upcoming @SenJudiciary testimony. pic.twitter.com/USVzsIR2Jc

Barrett is set to meet with ten senators in her tour to be vetted by the Republican Senate members.

Romney has stated he intends to vote on the nomination should it make it to the Senate floor before the 2020 election. He has not signaled whether or not he would vote to place her on the high court, but has embraced the nomination and defended it’s constitutionality.

My statement regarding the President’s nomination of Judge Amy Coney Barrett to be an associate justice of the U.S. Supreme Court: pic.twitter.com/R9JGiNOzEV

RELATED: Sen. Harris accuses Judge Barrett of wanting to do away with Obamacare after she cosponsored a replacement plan

The single-use carrier bag charge will increase from 5 pence ($0.07) to 10 pence ($0.14) and extend to all businesses in England from May 21, the Government has confirmed. Under the extension, all stores, including […]